22 May 2006, Cannes, France — Overnight The Da Vinci Code left Cannes – all the actors (except this one) flew home and their characters’ likenesses in photos and posters were taken down. The X-Men arrived and Magneto’s Brotherhood. In the front garden of the Carlton Hotel, bang in the middle of the Croisette, there we all were in battle costumes, leather, cloaks and armour – life-size cut-outs of the cast on parade and ready for action. And the next day we re-assembled in person flying in from all over and, jet-lagged, prepared for action – same journalists as I had met earlier in the week, in 7-minute interviews for the television cameras or speaking to groups of a dozen or so print journalists round a table. Sausage factories come to mind – and of course the three favourite questions.

1. What was it like working with Brett Ratner after Bryan Singer?

2. Is it true that there will be a Magneto spin-off movie?

3. If you could have your own super mutant power, what would it be?

To which I reply over and over:-

1. Once Brett told the cast that he intended to follow Bryan’s lead in the first two movies, I think we all were relieved that there were to be no stylistic U-turns and that we would be expected to re-deliver the characters in the way we had presented them twice already. Of course the two directors have different personalities but their approach was to be the same. Both relish directing movies so much that if they were not allowed to do it any more, I think they mightn’t find life much worth living. Such enthusiasm is infectious.

2. I have been hinting over the years since the first X-Men film that another one concentrating on Magneto would be “a good thing”, meaning I would enjoy making it. My hints seem now to have solidified into a rumour which might even develop into the actuality of such a project. Certainly Hugh Jackman is helping to produce a similar thing for Wolverine. Time will tell. I am encouraged by the success of the new technology which has made Patrick Stewart and me look convincingly 25 years younger in X-Men: The Last Stand, to think that I might, if required, play an even younger Magneto in the projected spin-off.

3. It would be a wonderful gift to be able to somehow control, limit even eliminate noise in public places. Imagine being able to silence an automobile, an aeroplane, an iPod! There are many sorts of pollution and unnecessary noise is one of the most intrusive and yet difficult to get rid of. 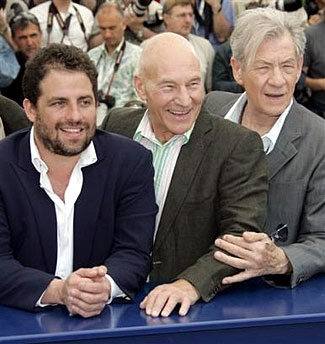 On the day of our premiere, the cast is assembled for photographs and interviews in a lavish villa in the hills above Cannes. In the morning, Charles and Erik, Xavier and Lensherr, the Professor and Magneto, Stewart and McKellen, Patrick and Ian, the two old chums have played a series of double acts for the television stations round the world. This was followed by a buffet lunch before the traditional press conference where no doubt the above three questions will be asked. Then I’m having a massage at my hotel before a meal with the others and my first climb this week up the red-carpeted steps into the Grand Palais cinema. — Ian McKellen, 22 May 2006 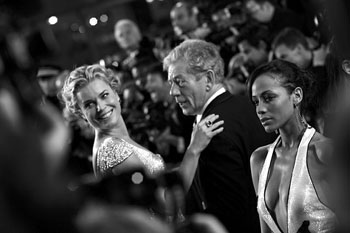 P.S. Last evening, after a meeting to raise finance for Colossus, Sean Mathias’s script about political shenanigans round the deathbed of Cecil Rhodes, I paid my nightly visit to Century, the beachside hang-out for members of the London club of the same name. My promise of an early night was thwarted by sounds of familiar music along the Croisette. Justin Bond (“Kiki” to his admirers like me) is in John Cameron Mitchell’s latest film and entertaining the crowd on the beach just below my hotel. Then John himself sang under the stars, with the Mediterranean as his backcloth - Cannes at its most romantic.

P.P.S. At the cast press conference I was asked which was my favourite of the two films I have been promoting at the Festival. I replied : "Lord of the Rings”, which seemed to satisfy.