The climax of Sir Leigh Teabing's part of The Da Vinci Code takes place within Westminster Abbey. Of the novel's locations, Rose Line Productions have so far filmed in the Louvre Museum and Cháteau de Villette, with Rosslyn Chapel and the Temple Church to come: but the Abbey? Although the initial discussions with the Dean there went well, eventually (and rather abruptly) permission to film in situ was refused. As no explanation for this reversal has been forthcoming, dark rumours worthy of Dan Brown's own imagination have been whispered abroad. Might not The Royal Family, who have special jurisdiction over the Abbey, might not They Themselves, have complained right royally? What if there were to be a royal demise and Hollywood interfered with a state funeral in the Abbey and vice-versa?

The growing rapprochement between the Catholic hierarchy and the Anglican communion who worship in the Abbey might equally have been crucial. With a new Pope to get on with, could even an ex-Catholic foundation comfortably house a project which not only questions Christ's divinity but challenges the source of the Vatican's power? More mundanely, perhaps the proposed financial arrangements were deemed insufficient by the Abbey's Chapter. 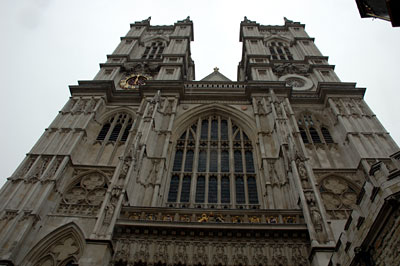 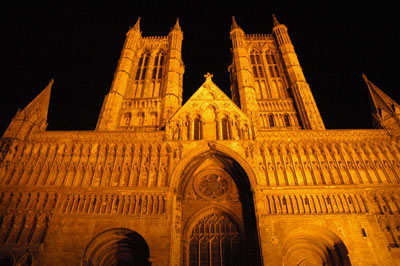 Whatever the true objections, none of them seemed to apply in Lincoln when its Cathedral was promptly scouted and happily cast in the role of Westminster Abbey. As both magnificent buildings, founded nigh on 1000 years ago, were constructed about the same time, on screen Lincoln will appear to be Westminster: ironical to say the least, if the Abbey's hope had been to avoid any association with the heretical plot of the book and film. 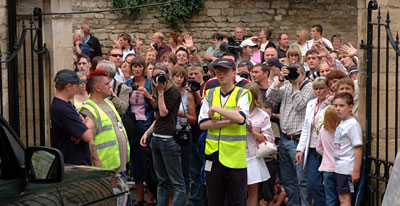 There has been controversy about the protestations in Lincoln against The Da Vinci Code. What is undeniable is the enthusiasm of the locals waiting all day outside our carpark in the playground of the Minster School. 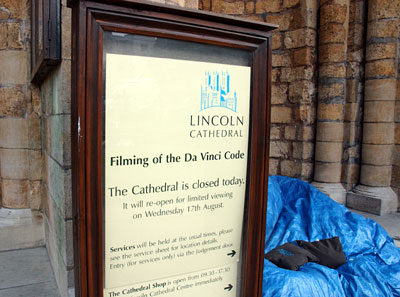 The magdalene blue robe to the right of this notice is weighed down with a sandbag. Who can tell why?” 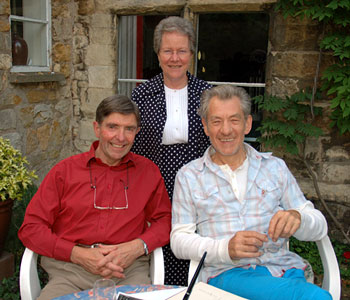 Sheelagh Knight and Alec The Dean with the fellow alumnus 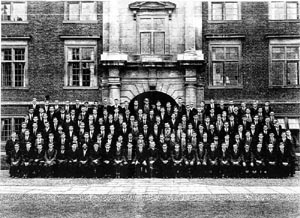 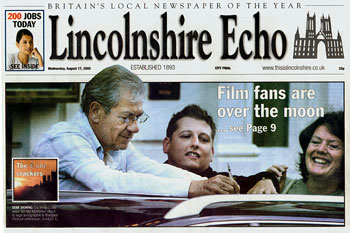 I hadn't been much to Lincolnshire before this week's filming and never to the ancient county town where stands one of the world's most glorious gothic edifices, atop the long ridge that dominates the surrounding flat countryside of eastern England. These days Lincoln is best known as a quiet agricultural centre and its huge cathedral seems over-sized for the dwindled population of local worshippers. It has, however, always been a place of pilgrimage where visitors have been made welcome over a millennium, and certainly everyone seems glad to see us here. The feeling is mutual.

Outside the White Hart Hotel, where the actors stay close to the cathedral close, there is a crowd of a hundred or more early morning and late evening hoping for a glimpse of Amelie, Gandalf and Forrest Gump. The Dean of the Cathedral holds a garden party and shows me an ancient photograph of a group of Cambridge undergraduates: "Freshmen 1958 St Catharine's College". We are both in it. I ask him about a nun who has caught the media's attention on her knees protesting blasphemy, simony, heresy and other transgressions that you'd need a theological directory to understand. He smiles, unconcerned. Look carefully at the fabric of the cathedral where a master mason has captured his spirit in stone, a modern version of the famous "Lincoln Imp". 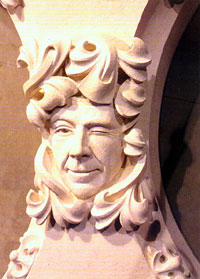 Mischief abounds here, and there is a newly-published booklet "The Lincoln Da Vinci Code" by one Dan Green, that I spied in proof form on Ron Howard's desk recently. The beginning point for this local quest starts with the local poet Alfred Tennyson, who wrote an epic poem "The Holy Grail" in 1869. His statue overlooks the temporary cafe for the cast and crew in the cathedral grounds. No more of that. Except I wonder. . . and I am not the only one. Dan Brown recruited Alexander Pope to bolster his Grail theories, so why shouldn't Tennyson also get involved? If Tennyson, why not William Wordsworth, who wrote (did you realise?) a sonnet in praise of Rosslyn Chapel and also travelled to France where the Priory of Sion might well have been impressed by a romantic poet with a strong disaffection for the organised church. I can tell you for certain that in Teabing's ballroom among the welter of manuscripts and other volumes, there lies close to his copy of "The Last Supper" a paperback edition of "The Collected Poems of Wordsworth". 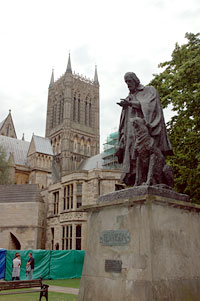 Klieg lights shine through the windows of Lincoln Cathedral 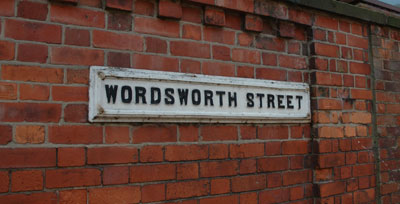 The romantic plot thickens. Is it mere coincidence that The Da Vinci Code should have filmed in Lincoln where this avenue exists, and will next film at Rosslyn Chapel, which William Wordsworth visited with Dorothy his sister in 1831?

FROM THE PRELUDE
by William Wordsworth
COMPOSED DURING A TOUR IN SCOTLAND AND ON THE ENGLISH BORDER, IN THE AUTUMN OF 1831.

V. COMPOSED IN ROSLIN CHAPEL DURING A STORM

THE wind is now thy organist;—a clank
(We know not whence) ministers for a bell
To mark some change of service. As the swell
Of music reached its height, and even when sank
The notes, in prelude, ROSLIN! to a blank
Of silence, how it thrilled thy sumptuous roof,
Pillars, and arches,—not in vain time-proof,
Though Christian rites be wanting! From what bank
Came those live herbs? by what hand were they sown
Where dew falls not, where rain-drops seem unknown?
Yet in the Temple they a friendly niche
Share with their sculptured fellows, that, green-grown,
Copy their beauty more and more, and preach,
Though mute, of all things blending into one. 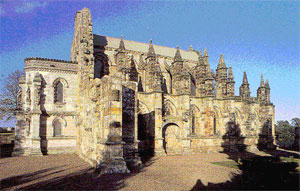 Westminster Abbey is impressive because of its monuments, copies of which have been moulded and immaculately recreated for Lincoln — Isaac Newton's tomb and the Unknown Warrior's. In movies things are rarely what they seem. By comparison with the Abbey's clutter of memorials and tablets and graves and statues, Lincoln impresses with its space, empty almost as when the buttresses first flew and the arches joined and the great roofs soared to heaven.

The Dean's wife, Sheelagh Knight, told me that the largest of the cathedral's three towers used to have a spire which almost doubled its height. Although it collapsed in the 16th century, she spoke as if it were only last year, which is what happens when you live in a mediaeval hall sheltered under the gothic magnificence of the cathedral itself.

When just now I nipped into the main nave there was a funeral taking place. Two hundred people dwarfed by the soaring perpendicular pillars, all in full bottom wigs, breeches and buckled shoes and for a moment I puzzled — is this a scene from the movie or just the way they do things in Lincoln Cathedral? — Ian McKellen, 14 August 2005