The evening we arrived in Cannes, a late night stroll along the beach front in the balmy air almost made me think I was on holiday. There were friends everywhere – not least on the posters which hide many a façade along the Croisette. Outside the Carlton stood Bryan Singer’s Superman with a totally bald Kevin Spacey like a dead-ringer for Professor X. The mutants are everywhere and of course the actors in Da Vinci Code. At street level the parks department had closed half the road to traffic whilst they decorated it with flowering shrubs and hosed down the tarmac. I slept well.

Next day, the Festival opened and The Da Vinci Code had the honour to be the first film screened. Throughout the day the cast was paraded in front of the world’s press or at least that part of it concerned with cinema goings-on. We were photographed and interviewed together and separately and then released in time to slip on our dinner jackets for the premiere. Our cars were guarded by police outriders as we crawled up to the Grand Palais cinema and more photographers who roared like hungry lions “Tommmmmmmmm!!!” 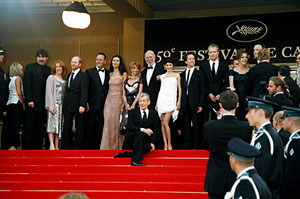 By now, with the critics’ views filling the columns and the airways, I needn’t add my first impressions of the film, except to say I think it at least as good as the book. Ron Howard has served up the story with admirable clarity and stirred in tasty melodrama and meaty passion to create a fulfilling dish. He has been rewarded already in Australia, Korea, Belgium and France (where the opening preceded the rest of the world) with box-office figures which have surpassed Harry Potter’s and may end up rivalling The Return of the King.

After a hurried dinner with the Festival organisers, our courtege delivered us to a black pyramid by the old harbour where it was too crowded to dance and too noisy to talk easily. I congratulated Tom and Ron and the rest who were leaving early in the morning, then went to bed tired of course, but happy.

The following day Aringarosa and Teabing were put in comfy wicker chairs on our hotel’s penthouse terrace overlooking the bay. Below the Mediterranean lapped at the sandy beach where hundreds of loungers and deckchairs stood empty. No-one is in Cannes for a vacation. Above it all, I told scores of journalists how much I had enjoyed making the film. — Ian McKellen, 18 May 2006