The Ballad of Little Jo

After the US tour of the Royal National Theatre's Richard III, I decided to try and work only in film until my screenplay was in production. So the day after we finished at the Royce Hall of UCLA, I flew to Montana to be in my first Western.

The story was intriguing. Young Jo, played by Suzy Amis (Titanic, The Usual Suspects), is thrown out by her family when she has an illegitimate child. She travels to the wild West, disguised for safety's sake as a man. Maggie Greenwald, the director, had written the screenplay. I was the immigrant Englishman who befriends young Jo and invites "him" to share lodgings. There is more than a hint of sexual attraction in their relationship, which erupts once Jo's true gender is discovered.

We were on location in Red Lodge, a small settlement close to Yellowstone Park, where a frontier village had been erected in the lee of a mountain whence bears descended at dusk to investigate us intruders. The air was fresh and I loved filming in such spectacular surroundings, especially when the snow fell. It was fun learning something of life in the West and I was proud to skin a rabbit in one scene. I regret, though, that I didn't get to wear a Stetson, tote a gun nor ride a horse but then this is one of the few Westerns to aim for historical accuracy and not everyone behaved like a movie cowboy in them thar days.

My best mate on the set was Cathy Haase, a refugee from New York theater. — Ian McKellen, June 2000 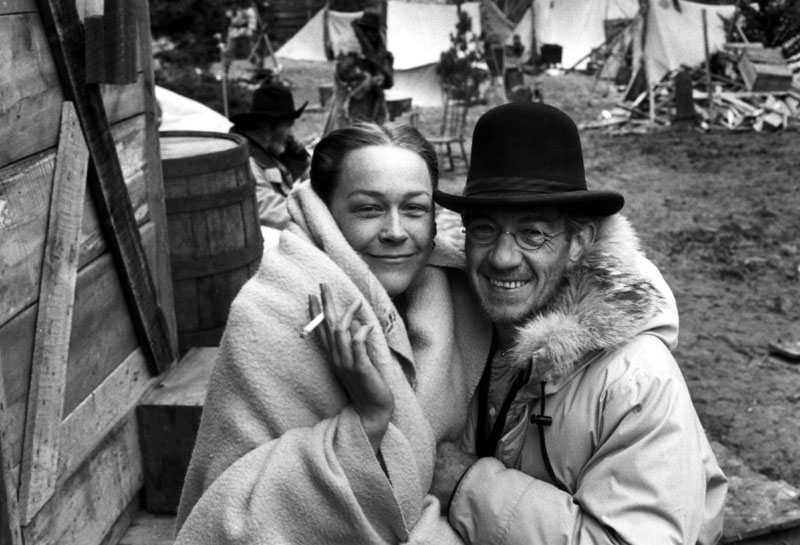 Cathy Haase and Ian McKellen
on the set of The Ballad of Little Jo
Red Lodge Montana, 1992