Okay fanboys and fangirls, here they are — the images you have been awaiting so anxiously — the very first glimpses of the actual costumes from the upcoming Bryan Singer film X-Men!

Our spies have smuggled these shots out at great risk to their future careers in Toronto and, in fact, all of Canada. Their motivation? To bring you, the true X-Men fans, the hard information you need to determine whether the costumes in the movie will live up to your expectations — or confirm your worst fears.

Speculation has been rampant that the costumes will be the wrong colors, the wrong shapes, Nazi-like, shoddy, total camp, or Matrix rip-offs. We think these photos will put to rest all such concerns.

Without further ado, fanboys and fangirls, the uncanny X-Men costumes:

First we have this exclusive shot of Ian McKellen (Magneto) in his "street" garb as alter-ego Erik Lensherr: 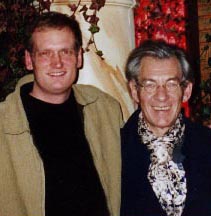 You see, not at all Nazi-like and, in the words of Sir Ian, "as butch as they come." Don't mess with these X-Men!

This next shot should finally quiet those boisterous fanboys who have been whining about the costumes not living up to the fantasy standards of the original comics. Here we have Magneto in full uniform (including helmet) during a climactic scene involving a monstrous mutant that has commandeered the Burger King at Niagara Falls!

His magnetic power restrains the monster effortlessly, saving the Falls from certain destruction

Our spies inform us that once the special effects are added in, the helmet will precisely duplicate the comic version, including flapping wings. For that, you'll just have to wait for the teaser trailer, now scheduled to run before showings of Anna and the King and Mansfield Park.

Thanks to Bill Condon for the original concept