Q: From "Link" in Russia: When I was 11, I understood that I'm gay. Nobody knows about this. Now I'm 18 year old and I'm alone. Many girls want to meet me, but I always tell them any pretexts. I'm living in town and everywhere's homophobia. All my friends hate gays. I know, that maybe I'll be alone all my life but I don't want it. Please, advise me anything.

A: I hope it is some comfort that you are not the only gay person to feel cut off from the world, and I can promise you that you will not be alone for the rest of your life. I appreciate that in Russia at the moment it is not easy to be gay but there are many gay Russians (and always have been); some of them are openly gay or, like you, still keeping it a secret. You should try and contact them in person or online. To begin with, is there not anyone else who you can confide in? No member of your family who might be sympathetic? No friend? Or perhaps you could introduce yourself anonymously on some chat-line and see if there's anyone else looking for support.

Your predicament shows how cruel it was of the Mayor of Moscow to ban last year's Gay Pride March and for others now to try and prevent a Gay Film Festival that is proposed in St. Petersburg this year. I send you my love and hope that now you have made a first step to share your problem that you have begun the journey to openness and happiness.

HOW DO YOU WORK?

Q: I'm a young actor from Canada. How do you work? After you memorize a script what is your process?  And I'd love to know how you break down a script. Jeremy

A: So all you want to know is how do I work! I wish I knew, though it would take a book rather than an e-post to work it out. Briefly: - Before rehearsals, I read and re-read the script and even try to learn it. At rehearsals, I hang on to the director's every word and each night at home run over the day's work and continue examining my part further, always in relation to other people's parts. I don't follow any formal method though I do find it useful to write down lists of what my character says about himself and the other characters and then what they say about him. The director Mike Alfreds taught me that. I depend very much on a director's indication of style and the playwright's structuring of the story. The big day comes with the audience, who tell the actors most of all what they have done and how perhaps to do it better.

Q: In Scene 41 of Richard III, you have Queen Elizabeth saying, "My dear brother-in-law, in those busy days When now you try to prove us enemies, We followed then Edward, our lawful King." But they're referring to the war between Edward, before he was king, and Henry VI, to whom her family was loyal at that time, before the death of her first husband and her marriage to Edward. My version of the play has her (well, Rivers, but the point stands) saying, "We followed then our lord, our sovereign king," and that makes sense — they're justifying what Richard accuses them of doing. What happened in the transition to the screenplay? Was this an oversight, or was it a decision to change the response from justification to denial?

A: I have puzzled over your lucid analysis of the change I made and I'm at a loss, twelve years on, to explain or excuse myself. You will have noted my general reluctance to alter Shakespeare and I had thought I only ever did so for the sake of clarity. It now seems to me that I mis-read the intention of the lines you quote, although in doing so, I did make it easier perhaps for an audience not familiar with the plots in Henry 6th to appreciate the argument between Elizabeth and Richard even if, as you suggest, it is not quite Shakespeare's argument. In other words, mea culpa.

Q: I'm looking forward to the DVD of THE DA VINCI CODE although I've seen it already twice in cinema. I wasn't very enthusiastic about the beginning but when Sir Leigh answered the doorbell of Cháteau Villette the film had its real start. Was it only a coincidence or did you perhaps suggest that RÃ©my should be murdered near your home in the Docklands viewing Millenium Dome, although in the book it happend in St. JamesÂ´s Park?

A: One of the joys of Da Vinci Code was to be filming often close to my home in London but I didn't suggest the handy and spectacular Docklands location across the Thames from the Millenium Dome. St James's Park is an over-familiar setting for spy movies and I was glad, for that reason too, that a change was made from the novel.

Q: Are you a people observer? As an actor I have been taught to constantly store personal memory in my 'brain files'. Have you ever used the people in your life as research for a particular role?

A: I do my observing on the London underground and in the street, helped by not using an iPod or mobile phone. I often look around for someone I know or spot in public who looks like or walks like or sounds like the person I am preparing to play. It's reassuring to know that the fictional character has a real living counterpart.

Q: Recent news has surfaced that Guillermo del Toro will be directing "The Hobbit"; whilst any fans obvious choice for the film would be Peter Jackson, I believe that del Toro is a worthy replacement. I've recently wrote an essay on his film Pan's Labyrinth for a Film Studies course, and was wondering if you had seen it, and whether you agree that he has a distinctive and very expressive style?

A: I am one of the multitude who admires Pan's Labyrinth. Del Toro's imagination will match well with Tolkien's and I'm looking forward to seeing his projected screenplay for The Hobbit. Meanwhile we are in touch, so all looks well for a collaboration in Middle-earth in 2010.

Q: I am an English teacher in Coventry At the risk of sounding like a fawning toad, it is good to have someone like you in Public life. You make excellent cinema and dip into blockbusters and give them weight. Although I am not gay myself your openness about your sexuality is inspiring to not only gay people but all.

A: In the context of Stonewall's latest campaign to eradicate homophobia from British schools, I hope yours has a a positive policy of looking out for gay students and gay staff who in most schools feel unwelcome and at a disadvantage.

Q: Will you be appearing in the Old Vic pantomime again this year? I know you and Stephen Fry are friends, and his wonderful play will be perfection if you're the dame.

Q: I saw Stephen's Cinderella at the Old Vic, where all the characters shared his wit and erudtion. This led to a lot of good humour, particularly from Sandi Toksvig in drag as the storyteller. She descended from the flies in an armchair smoking a pipe. Not a panto for the kids perhaps.

Q: I am a young filmmaker from Norway. In the 2004 South Bank Show documentary, you talked about taking on roles both on and off camera/stage - you said: "Who am I now? Is this the real Ian?" Do you consider acting a way of escaping from something inside yourself or some part of the reality surrounding you in every day life?

A: Years ago acting was a way of coping with my shyness, mixed-up with the need to hide my sexuality. On a stage, I could hide by being out in the open, as it were. These days, having examined the character, I try and enter his world not to escape from my own but to continue the thrill of discovering worlds elsewhere.

Q: Did you take any pictures of your stay in "Bag End", PJ's reconstructed film set that is now his guest house?

A: Peter Jackson doesn't want his home invaded by photographers but as he took these two snaps when I visited in 2007, perhaps he wont mind if we see them. I am by the Bag End fire in which Gandalf threw the ring and below stairs I am clutching Frances Barber, en route from the main house for supper in Frodo's dining room. 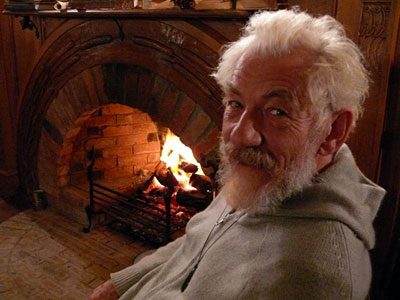 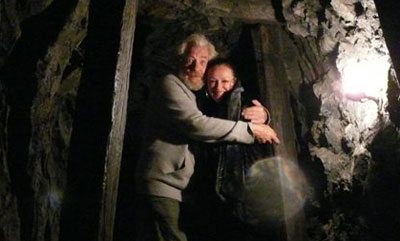 Q: As an actor who really appreciates your work on King Lear, I wanted to solicit your opinion about a speach in Hamlet. In Act II, Scene 2, Hamlet gives his famous speach on how much a "What a piece of work is a man".  Most actors deliver it as if they were exhaulting Man, singing his praises. However, obviously Hamlet is being completely and utterly sarcastic. Do you think strong undertones of resentment and bitterness about humanity would do justice to its meaning?

A: I haven't heard the speech delivered in quite the way you describe but so what? All will depend on your reading of Hamlet's personality and his mental state as he considers humanity.