Q: Hello! I was just reading about PBS and your King Lear performance. I imagine they will have to censor it, what do you think?

A: The DVD of King Lear which will be shown first in Japan this month, then on Channel 4 More at Christmas in UK and on PBS in USA by, I think, April, will be a cut-down version of our Royal Shakespeare production, which lasted over three hours in the theatre but runs for about two and half hours on screen. Most of the play is left and no-one should feel cheated as Shakespeare's texts are invariably edited for performance. I think that my Richard 3, (an extreme example), had less then a third of the full play intact by the time I had prepared the screenplay. 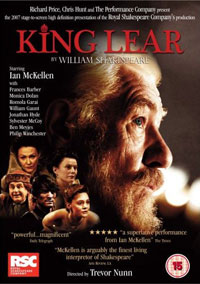 However, Lear has not been "censored". In the 18th century and after, the play was often cut to avoid offending the sensibilities of those who would find an onstage blinding too horrific. In one amended version, Lear survives at the end and his beloved daughter Cordelia marries Edgar. Trevor Nunn has cut our version to fit the constraints of technology and the broadcasters but not those of the moralists.

He did, though, instruct the cameras to avoid any full-frontal shot of Lear when he removes his trousers in the storm scene. This was a request from our broadcasting producers. Apparently video viewers can stomach onscreen stabbings and poisonings and hangings and all sorts of cruelty that the play displays but not the brief flash of an old king's penis. Theatre-goers are of sterner stuff.

Q: I recently read a book called "There are no Shortcuts" written by Rafe Esquith. He mentioned you and how passionate you were about the children in his class, inviting them to all sorts of events and even leaving New Zealand to come see a production of their performance of "King Lear". I was wondering what is it that makes you so passionate about these students, and even students in general?

A: All of us who have been lucky enough to meet Rafe Esquith's pupils share an admiration and wonder at his methods of teaching. He expects them to work hard and promises their reward will be a fulfilling life. When they apply this devotion to Shakespeare, they become a company of players whose love for the language lands on the audience's ear and heart equally. 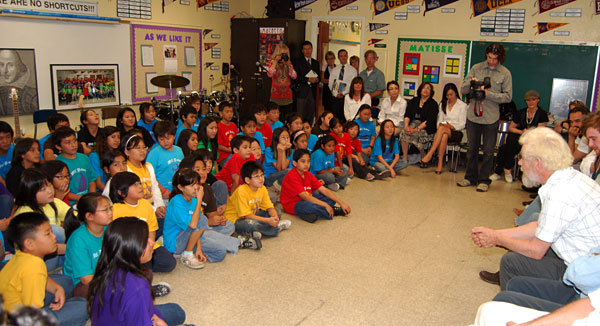 The Hobart Shakespeareans and Ian McKellen, 2007
Photo by Keith Stern

Q: I'm dying to know (not literally of course) if there is any mythology wrapped up around plays other than the "Scottish" one.

A: I personally received quite a nasty physical blow to my left arm after memorizing Richard III. I have not developed a hunchback yet though, or tried to do away with my brother

Q: Do you prefer acting live on stage, and doing Shakespeare's Elizabethian plays, some of which can be related to real life situations, or do you prefer being in films that have unrealistic, yet imaginative plots?

A: No preference: though I suppose when I have just had a long spell of theatre, like last year's Lear/Seagull tour, it's understandable that I'm looking forward to a change. 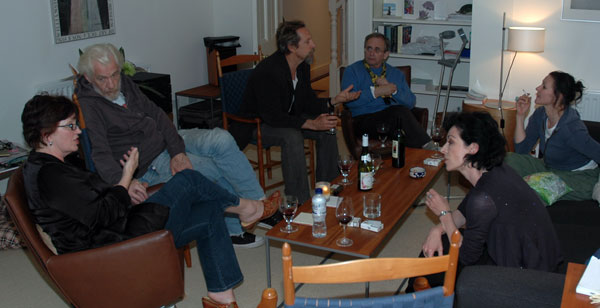 Q: I recently returned from a brief visit to Prague...waiting for my ride around 8:30 pm on March 11th...Ian McKellen also was waiting patiently with a young woman by his side at the curbside...several fans honord him with a friendly praise...I was at LAX by the United Airlines Express area where I picked up my baggage...I was the tall long haired artist type standing against the concrete wall...exhausted from a very long flight... Peace & Espresso.

A: I wonder who it was at LAX - I was in London that day.

Q: We could not believe our eyes as we were walking through Cambridge today and spotted you having a chat on the street in front of Kings College. Was that Simon Callow standing with you? I spotted him first, and then my husband, Allen turned to me and said, "But, Kristin, look who is with him—it is Gandalf!" We so admire your work and are huge fans. What a treat it was for us to meet you in person.

A: I was in Cambridge to publicise Tim Cribb's book about the university's Marlowe Dramatic Society of which I was president: Bloomsbury and the British Theatre, with an introduction by me. That evening I talked to members of the Marlowe and St Catharine's my old college about matters theatrical and gay. Simon was on tour with Peter Shaffer's Equus. 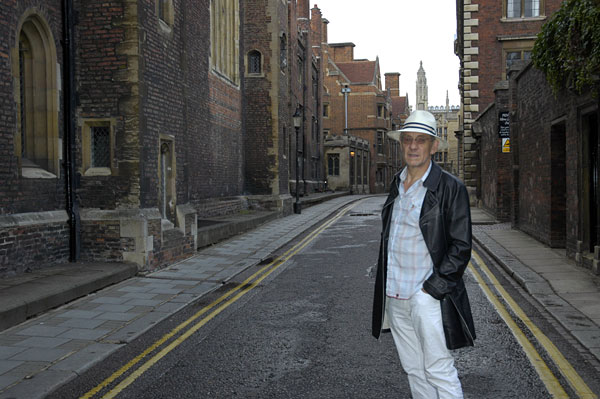 Q: Hearing of the death of Paul Scofield made me wish I had written to him to tell him how much his work had meant to me, but I never did. So while I have it in mind I would like to say that I have often intended to write to say how much I have appreciated your work. Two things in particular I remember, a film called 'Amy Foster' in which you gave a wonderfully sympathetic performance that I found very moving as a doctor caught up in a tragic love story, and the other your Mr. Puff in Sheridan's 'The Critic' at the National Theatre some years ago. I think that play is one of the funniest things ever and I have rarely seen an actor give so much and put so much into a performance as you did in that role. Perhaps actors don't always get to know how much their work means to people, so thank you.

A: And thank you too. Actors always appreciate letters from strangers which are often more reliable in praise or dispraise than comments from careful friends or careless critics.

Q: Can I ask if filming goes ahead on Dambusters, whether you will be playing the part of Sir Barnes Wallis? I have a fond wish to see Orlando play Guy Gibson, and would love to see you both in a film together again.

A: I still haven't read Stephen Fry's proposed script of The Dam Busters, though when I was last in Wellington, Peter Jackson showed me the original film. So I hope it all happens eventually. Although Michael Redgrave's will be a hard act to follow, less mature actors than Richard Todd and his colleagues should be more convincing as Gibson and the other young pilots.

We'd like to give a big THANK YOU for the kindness you showed to our group at the First Light Movie awards. It was an honour to recieve the best drama award and I know that it has inspired the young people to follow it up with more films of their own. If you'd like to see some more of their work (including a short video of the awards) then please visit www.myspace.com/compulsive_productions  You've made a small media group feel like world beaters,  Matthew Hall Compulsive Community Pictures / Compulsive Productions Chichester.

A: I was very glad to be at the First Light Movie awards for the second time. It was good that so many established film people wanted to acknowledge the next generation. Great good luck for the future.

Q: A friend of mine at work said he heard on the radio you will be doing a panto in manchester this year. Is it true ? i hope so It's a jolly idea though

A: I wouldn't want to play Dame again without a terrific script tailored to my inadequacies. Most pantomimes are thrown on with the minimal of preparation, that is confusing to actors not used to just arriving with their act intact like stand-up comics can manage. But I look forward to panto season and will as usual see the best that are on offer at the year's end. 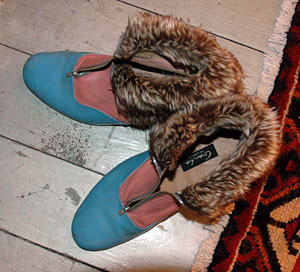 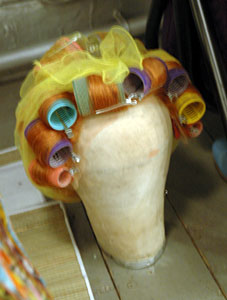