Q: Are there any worries that every action film released this Summer is going to get blown out the water, both commercially and in terms of special effects, by the Matrix sequel? I don't know how close the release dates of the two films are but I believe X-men is likely to suffer more than most of the other action films (there was a feeling that the original X-men used some elements of the Matrix such as the leather costumes).

A: I live away from the centres of film excitement when it comes to this sort of question. In Los Angeles they would have a view but here in London I just don¹t know. I hope of course that quality will win through and that both Matrix sequels as well as X-Men2 will find their audiences and not interfere with each other's success.

Q: i just saw the X2 trailer (cleverly enough it was placed with the two Towers) and it was phenomenal! I wanted to know: the scene where you are playing chess, is that the same one from the first movie or does he visit you again?

A: There is no chess game in X-Men2 although I think Magneto is pondering the chess-board when visitors come to his plastic prison...

Q: I was just wonderin' what you think about the rumours currently running 'round the 'net about trouble with Brian Singer on the set.

A: I have read some of these Internet reports but they refer to a day's filming when I wasn't called for work so I am in the happy situation of not being able to comment with any authority.

Q: Im brazilian, and I'm a x-men fan! I liked the first movie, but I really think that the prejudice and human being intolerance could be more explored and showed. I do expect this movie will do that. I would like to know another thing: is there any kind of innovation in X-Men 2? What will we have in this movie that we havent seen in others?

A: I think the sequel screenplay takes the prejudice theme for granted although it is explicit in every scene of dialogue or action. X-Men is still the story of a repressed minority. Beyond the new characters don't expect a break with the first movie and its aims. What continues to distinguish this cinema franchise from others is its roots in political awareness. I bet Bryan Singer comes up with a part 2 as inventive and confident as Peter Jackson's The Two Towers.

Q: I wanted to know if Magneto gets to fly more in X-2? In the comic book Magneto has so many creative ways to use his powers. Will fans get to see Magneto make a protective force field? Do you wear a helmet in this film? Is it different than in the last film? I cannot wait to see you escape that plastic prison and kickin' some butt! Please tell me you get to do your fair share of the action???

A: OK here's the scoop — Magneto wears his helmet again but it has been cunningly adapted so that it has a little more style than last time round. Same colour though.

Magneto flies and spectacularly deals with a life-threatening technical problem — but whether he does this from within the prison or elsewhere would spoil it for some.

Q: How is working with Anna Paquin? You have pictures with everyone from the first movie cast but her. Is she lovely as she seems to be? Thanks.

A: Here's a photo of Magneto and Rogue off duty in Vancouver, September 2002.. 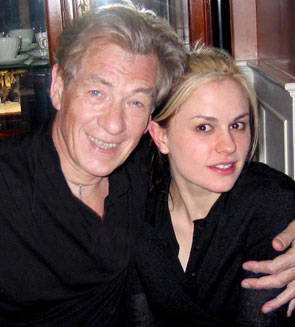