A: I'm glad you had a good time with the 3rd X-Men movie — but didn't you notice that Brett Ratner's last scene for Magneto hinted that his powers might be possibly restored in a 4th? 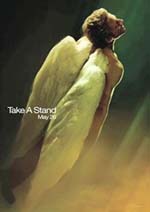 Q: My family and I saw the latest X Men last night and I need you to settle a disagreement I had with my son. Setting aside the obvious connection to your character's Shoah experience in the camps I saw a lot of references to homophobia in this latest episode. The clues I picked up on are 1: there's a plan to change people who are happy the way they are. 2: what is normal is considered to be abnormal but fixable. 3: the archangel flying over San Francisco, and then with his father, made me think of Angels in America and finally the lovely way you enunciated 'homo sapiens.'

A: I'd missed the possible reference to Tony Kushner's inspired analysis of modern attitudes in Angels in America but your other two points are spot on. The stories in comics and films alike are all about society's inhumanity to minorities of race, sexuality and other "mutancy".

Q: I grew up reading Tolkien and Chris Claremont's X-Men and I felt compelled to stop by here and commend you on jobs well done. Being a gay man myself in my early 30s, I'm all too aware of some of your motivations for portraying such a powerful (both physically and emotionally) character taken from the pages of a "simple" comic book. I must also say that I was very pleased to see Magneto portrayed more like himself from a physical standpoint. I'd always felt that the first two stories didn't give the audience a sense of how powerful Magneto really was.

A: In previous E-posts I've discussed Magneto's superhuman appearance in the comics which we exchanged for a more naturalistic look in the movies. When I saw The Last Stand I was as astonished as the rest of the audience by Magneto's strength. No, I hadn't actually detached the Golden Gate Bridge from its moorings but by golly the Master of Magnetism certainly did!

From: Eleanor and Sean

Q: We just watched and enjoyed X-Men: The Last Stand. We couldn't help but notice, however, a 'problem' with the mutants-as-LGBT-community metaphor. Would you agree that the message is somewhat undermined by the fact that the mutants who are most proudly 'out' and dismissive of the 'cure' are considered the bad guys? Are the X-Men the good guys because they are willing to stay in the closet?

A: The argument is not between the openness and the closet, but rather between lobbying and direct action, the familiar argument among civil rights activists. I would have preferred, though, if Magneto's supporters hadn't all looked such ruffians. The mohican hairstyles, the tattoos, and punky clothes seemed more to do with radical fashion than disaffected mutancy.

Q: I really think you should push hard to play the younger Magneto. Even if the movie was awful (though, as Magneto has always been the best part of the X films, I can't imagine that being possible), it would be one of the most ground breaking films of our time.

A: Indeed: and just think the money Hollywood could save on botox.

Q: Ian, I am a 17yr gay male in a small town in the state of Ohio. Seeing you in the first X-men, it really gave me an awesome feeling that you were open about it. Seeing as most Hollywood actors today are not, I wanted to thank you for giving me the hope that I can have a future in the film world, and still be myself. Also during the forest scene in X-men 3 I had a feeling that you where truly speaking from your heart when you said "They wish to cure us, but I say to you, we are the cure".

A: You are right: it took no effort of imagination to speak those stirring words from the heart. Not basing my life or career in Hollywood has made it easier for me as an outsider not to succumb to any pressures to lie about my sexuality. Anyway, isn't acting about telling the truth about human nature, even within a fantastical tale of mutants and superhuman faculties? 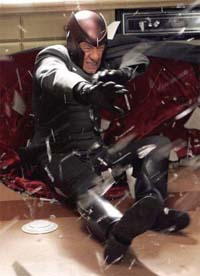 Q: I have been a huge fan of the multifaceted relationship between Magneto and Xavier in the 15 years that I have been reading the comics and was pleased that they continued this theme in the films. In the third film however I felt that when Xavier is killed, Magneto is not given a moment to truly react, he's shocked which is obvious and he "tells Pyro off" later but that's it. Could they not have had him magnetically throwing Pyro across the room or something in anger?

A: You have a point. Further, I didn't totally buy Magneto's half-indifference to the transformation of his beloved Mystique when she saves him in the prison truck. He was, however, in the middle of trying to save his kind from the cruelty of "the cure" and there was major work to be done outside and beyond. Mourning for her, and for Charles, would come later in private tranquillity perhaps.

WHAT HAVE I DONE?

Q: At the end of "The Last Stand", Magneto says "What have I done?" Given his past history, it seems wrong for the character to suddenly regret defending himself and those like him from persecution. If he refers to unleashing Jean's powers on the world, this still seems out of character.

A: That's just how it was imagined by the script and therefore by the actor, probably because Jean has fulfilled all Xavier's worst fears, which Magneto didn't credit. Maybe he feels that he has helped to unleash the force which killed his best friend and partner with whom, in the comics, he founded the school for young mutants.

Q: When I first heard Magneto's speech about the cure in the forest, I had the impression that the man who was talking was Martin Luther King. You voice had the same intonation, and power! Was it deliberate? That was extremely powerful.

A: I'm glad you felt the power of Magneto's eloquence. In the previous two films I had bemoaned the lack of speeches that could convey the depth of his anguish and so I relished the oratory in the third. Perhaps the writers, Simon Kinberg and Zak Penn, consciously referred to Dr King, whose open-air speaking inspired a generation of civil rights activists. If so, they didn't mention it to me.

Q: You are magnific! I'm so proud about you!

A: Being magnific is just terrifical! Thankee kindly.