Cháteau de Villette these days is not quite what it appears to be — is not, for example, a stately out-of-town retreat for some ancient French dynasty. The current owner recently renovated the 17th century structure. Upstairs there is a wide carpetted corridor with 18 double bedrooms tastefully done up to fit the architecture. Sir Leigh Teabing's fictional home sometimes takes in paying guests, with a Da Vinci Code Tour on offer. To complicate appearances, for filming Teabing has rather taken over. Downstairs, the stone-clad rooms are stuffed with his things — papers, books, charts, models, works of art — multitudinous evidence of his obsession for the Holy Grail. It was odd to walk into the splendid welcoming hall for the first time and see my photo on the circular table, standing with an unknown woman — ah, of course, the late "Lady Teabing," an invention of the rehearsals that Ron Howard held in London and Paris a couple of weeks before shooting began. 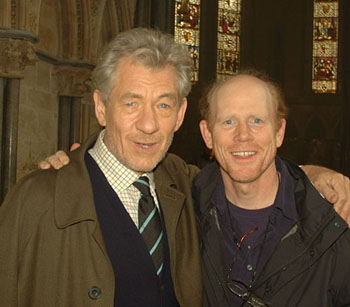 Akiva Goldsman was very open to suggestions from the cast as we pored over his screenplay of Dan Brown's book and re-imagined the tale for the cinema. I had a few questions about Sir Leigh's background that the novel doesn't address. We ended up imagining that he hailed from a landed-gentry family, whence his inherited title. A Baronetcy is only one source of a "Sir" in front of your name but it's one that uniquely can be passed down to an heir. I thought it made sense that Sir Leigh Teabing (Bart.) was born into the privilege of ancient stock with a title and maybe an education at Eton College near Windsor, where Princes William and Harry also went to school. If his family were down on their financial luck, perhaps he married into the money that bought the Cháteau where as a widower he now lives. 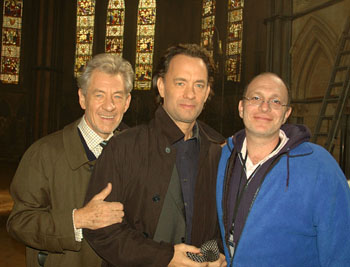 It's 50 years since I first came to Paris, staying in the suburbs with my American step-uncle who then worked for UNESCO. Now I have a duplex suite at the sumptuous Hotel George V, a jewel in the Four Seasons chain just off the Champs-Elysées. I overlook the rooftops and, lying back in my bath, my window perfectly frames the Eiffel Tower. Filming can be luxurious. At the Cháteau too I have a beautiful room all to myself but I never use it — I'm too busy enjoying my first day's filming, learning names, getting acquainted and practising limping down the curved staircase and into the action.

There is nothing untoward to report. I note Ron Howard's meticulous eye, and his gentle calm that affects us all. Tom Hanks is unfailingly good-humoured and relaxed. Audrey Tautou is also in good spirits working from home now, speaking French and no longer feeling the odd girl out among the Americans and Englishmen in the cast. — Ian McKellen, 13 July 2005 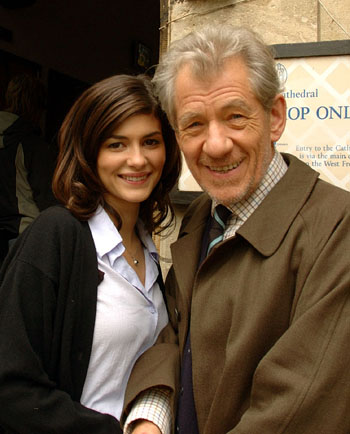