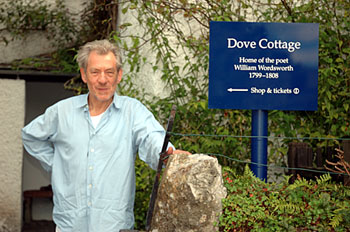 I had planned the week before my first day's filming of The Da Vinci Code in London almost to the minute. I was back in the Lake District recording what remained of William Wordsworth's verse autobiography The Prelude.  Earlier in the year, Sue Roberts had directed my reading of the better-known sections of the 13 chapters for BBC Radio 4's Book at Bedtime. I would need four long working days to complete it, so I was kipping in Grasmere just opposite WW's Dove Cottage, in what used to be his housekeeper's cottage. Robert Woof, the Wordsworth Trust's director, lives there now with his wife and colleague Pamela. This partnership knows so much about the lives and works of the Lakeland Romantics, with whom they seem to be on first-name terms, I keep expecting the long-dead poets to interrupt our readings and offer up their own concordance of notes to accompany those of Robert, Pamela and Sue.

Our second day was interrupted by a demanding flurry of phone messages from my agent, with the news that it was raining in London, a not unknown happening in an English summer. But this had meant that the outdoor filming of The Da Vinci Code had to be abandoned in favour of indoor work that would now involve me the following day. I drove away from Grasmere within the hour, and six hours later was home in London with the script for the next day's scene — more Teabing in Cháteau Villette, this time recreated in film studios west of London. 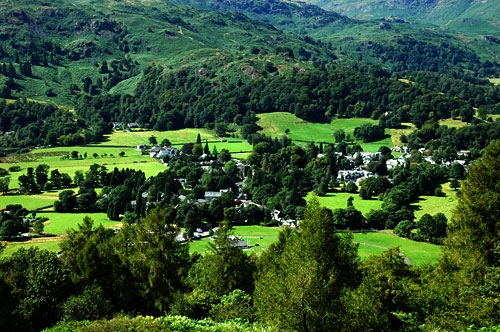 I was most disappointed about missing out on my plans for three days with loving friends who had gathered in the South of France, for wine and sleep and a chance to learn the long expository speeches through which the story of the Holy Grail is explained by my character. I got three hours sleep before being driven out west from my eastern home into the jaws of the monster — The Film.

It's taken 40 years of sporadic film-making for me to at last feel at home in front of a camera, nearly to the extent that I have always felt at home on a stage. The interior of a studio is now as friendly to me as any theatre green-room. When I'm in a play I am invariably working with people I know, some of whom I will have worked with before. But each film I make I start off feeling I don't know anyone — not even the actors. Although Tom Hanks, Audrey Tautou, Paul Bettany (to give them their official billing order) are not my intimates they are each of them immediately adorable. One of the greatest of joys of filming is the friendship.

Just as I'm feeling good, a personal disaster strikes. I can't seem to remember the lines, at least not when the camera is trained on me for a close-up — the lines you long to hear, Sir Leigh Teabing's lines like. . . . Ah, but I'm not allowed to quote lines from the actual script. Well, perhaps I am and I can't really think why not as they have already been read, most of them, by millions of readers. Yet those darn words keep popping out of my head just as I try to effortlessly recall and mint them anew. Some hope. Just as I'm fearing Alzheimer's has struck, I realise the obvious — that I just haven't had the usual amount of time to do my homework of studying the text. I stop worrying when Ron Howard, who is a patently honest man, says he's happy with my work that day. I'm determined to believe him. 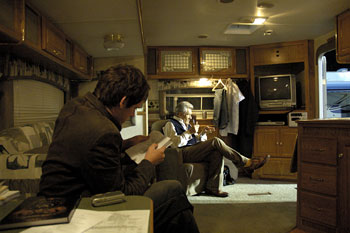 Matt Butler, a friend who is playing a plainclothes detective in The Da Vinci Code, gallantly hearing me learn my lines in my trailer
Shepperton Studios, August 2005

The studio set is appropriately amazing — the ex-ballroom where Teabing experiments and does his idiosyncratic research into tracking down mysteries of the Holy Grail. Every corner of the long wood-panelled hall is eccentric and passionate. In the massive, sculpted, fake-stone fireplace there's a gas fire flickering late at night when Robert Langdon and his mademoiselle come a-knocking at my gate. Manoeuvring around the glass display cases and mahogany desks and chairs and piles of things is fun, hobbling on two sticks — not crutches as in the novel. The polished black canes have been specially made to fit my reach with silvery looped handles. Anyone who objects to changes like this that occur when adapting a novel for the screen should read The Grey and White Books where I defend every artistic decision Peter Jackson made regarding Tolkien. Ron Howard is equally devoted to translating the page-turning excitement of the book into a thriller of a movie. At two in the morning, cinematographer Salvatore Totino's low lighting is sinister and full of that sense that "something-is-about-to-happen. . . ." 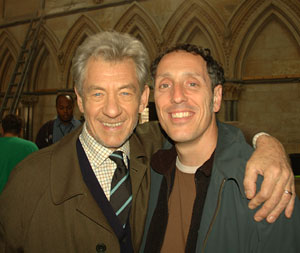 Beyond the set, watching on television monitors the re-enactment within, was the originator of this enterprise Mr — visiting with Mrs — Dan Brown. He is full of enthusiasm for the filming, a new experience he will soon be used to now his series of Langdon novels is set to be transferred to the big screen. This first one is going well — on schedule, and at the time of writing my memory is working as it ought!  Teabing's first scene has already been roughly edited. I have not seen it.
— Ian McKellen, 26 July 2005