I agreed to play the British politician, John Profumo, after other actors had turned it down as being too sensitive an issue. The scandal of the Conservative cabinet minister's extra-marital affair, about which he lied in a statement to the House of Commons, galvanised the nation and severely damaged the government. Since his disgrace Profumo has rescued his name with charity work in the East End of London and his friends were sad that this film should reopen old wounds. The producers felt that the issues of the case remained relevant 30 years on, touching on the relationship between parliament and the press as well as on the hypocrisy that bedevils sex and public figures. I agreed with them. Before agreeing to play Profumo, I wrote to him asking for his opinion but I received no reply. 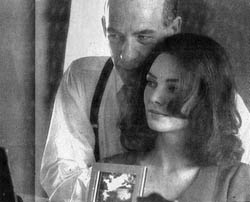 I had just come out as a gay man and one of my motives for then proceeding, was to prove that I could be convincing as a character about whom little is remembered other than that he was a raging heterosexual. On my first day I had to simulate the missionary position under silk sheets with Joanne Whalley-Kilmer. I enjoyed that, particularly as I was the envy of my straight friends.

It was also good to work for the first time with John Hurt, a splendid actor with whom I have sometimes been confused — to some people, long-faced British actors all look the same. John played the lead role of Stephen Ward whose suicide during his unjust trial resulting from the scandal, made him the true victim rather than Profumo and his wife, the actress Valerie Hobson. 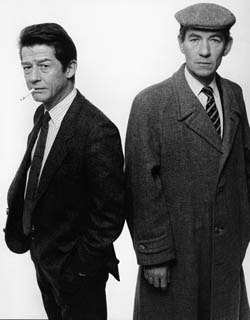 The parliamentary scene was shot in Granada Television's scaled-down version of the House of Commons, part of their permanent display alongside the Coronation Street sets in Manchester UK. — Ian McKellen, June 2000